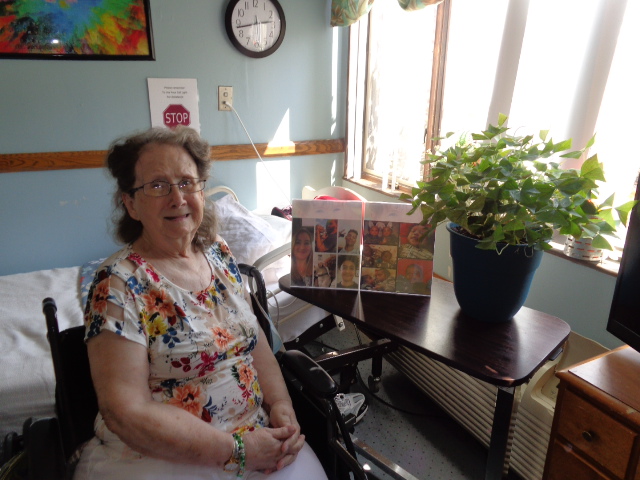 Pat was born in Herron Illinois to James and Pearl Bailey. She had one brother Robert Bailey who now resides in Arizona.

Pat went to school until the 10th grade but said she had dreams of being a clothing designer or an architect. Pat states that her grandmother was the influence for her dream. When her grandmother passed, she inherited her sewing machine. Pat learned how to use it and fix it and enjoyed sewing very much.

Pat’s first job was working for the Walgreen’s drug store in Herron, Il. Pat worked the counter in the soda shop making ice cream and milkshakes. She worked there for 10 years before moving to Chicago.

While in Chicago Pat worked for Perry’s Drug store. Pat had to acquire Beauty School education which led her to become the manager for the cosmetics counter. She also managed the grocery department and the pharmacy. Pat worked for the drug store for 19 years before health issues forced her to quit.

While in Chicago Pat met and married Richard Dabrowski whom she was married to for 35 years. Pat and Richard had one daughter named Lori.

Pat states that there were several world events that happened in her youth. The first major event was Polio. The second was the Korean War. She says that her dad was unable to sign up to go to war due to health issues, but she remembers he sold war bonds and did what he could to support the troops. The third major event was the Assignation of President John F. Kennedy. Pat remembers this day very vividly stating that she was at work when they got the news and they had a small TV behind the counter which she and her co-workers watched all the events unfold. She says that when they determined it to be true that they all broke down and cried.

We asked Pat what the difference is between the way the kids are growing up today between the way she grew up and she stated that in her generation they listened to their parents, they did not have drugs, and there was no technology. She says that her father did not purchase a television until she was 16. Before this her family listened to radio shows such as the Beverly Hillbillies.

When asked if she could write a message to the younger generation of today to be put in a time capsule for them to read 20 years from now what advice would she like to give them. She stated that she would tell them to

work hard by staying in school, get a degree in something that you love to do and always be a good role model to the younger generation coming up behind you.

Pat’s hobbies today include, crocheting, sewing, arts/crafts, and gardening. Pat has several plants in her room that she is very proud of. She has quite the green thumb!