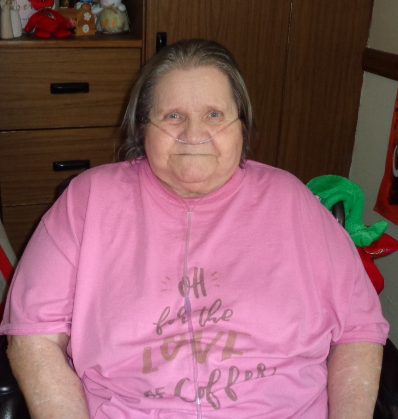 Sharon Cox was born in Eugene, Indiana to Herschel and Maddie Steele. Sharon had 4 brothers and 4 sisters and was one of the babies of the family. Sharon graduated from High School in Cayuga, Indiana.

Sharon tells us she wanted to be a nurse when she grew up. She even received a college scholarship, but “after 12 years of school she she had enough”. Sharon worked her first job at the Flamingo hair pin factory in Danville, Illinois. She says” the job was very tedious as she had to put each individual hair pin in individual slots”, so the job did not last long for her. After working at Flamingo, Sharon discovered a job that she would stay working at for the next 43 years at Model Star Laundry service. Sharon and a co-worker were dubbed the speed queens as they could each run 2000 sheets per day! She  loved her job and always joked with her boss that she “owned” it with as many years as she had worked for him.

Sharon faced a few big world events during her lifetime. When Sharon was a child Polio was a serious problem, but she was blessed to never get it. Sharon has also seen the Korean War, and the assassination of President John F. Kennedy. Sharon feels that the difference between the youth of today and the youth of when she grew up are stricter rules that her generation had to follow.

Sharon’s hobbies include BINGO, working on word search books from her daughter, coloring and working on arts/crafts in her room.

We asked Sharon if she could write a message and put it in a time capsule for youth to find 20 years from now what would she like to say to them, her message is: