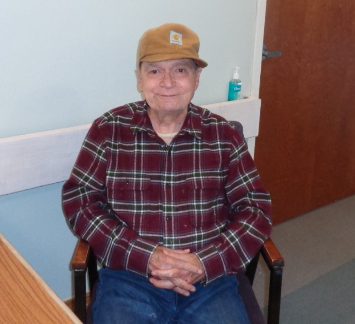 Jack was born in Danville, IL to John and Louise Wilkinson. His father was an accountant and his mother was a homemaker. Jack had one brother William and one sister Susann.

Growing up in Danville he attended Edison school and graduated from Danville High School. He attended some college but decided that was just not for him.

Jack is a proud veteran of the United States Army.

Jack worked for many years at the Danville Commercial Newspaper where he was in the Advertising Department. He sold advertising space to businesses in the community as well as set up the printing press with the finished advertising campaign.

He never married but stayed very busy meeting people by fishing, Revolutionary War reenactments, the Red Mask theater and various singing groups. Jack volunteered at the Red Cross, United Way and the Boy Scouts. He was also an active member at the First Presbyterian Church in Danville and enjoyed visiting antique shops in his spare time.

Jack is an avid fan of the Chicago Cubs and watches the games when he gets the chance. As an avid reader, he enjoys auto biographies of Presidents and political figures.

Jack resides with us at Pleasant Meadows and his hobbies now include drinking coffee (his favorite), listening to his favorite artists such as Frank Sinatra and Bing Crosby, watching politics and the news on tv, reading the Danville Commercial News, going outside and  live musical entertainment.