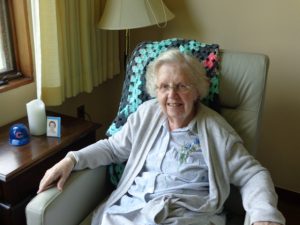 Joan Deering was born to Emerson and Bernice Martin in Kokomo IN. . She had three brothers Bob, Richard and Junior with whom she got along well. During her younger years Joan was a member of the Daughters of the Masonic Lodge and was named Grand Bethel Queen. Joan lived at home with her parents until she was 45 and married her sweetheart Bill Deering.

Joan knew at the age of 7 or 8 that she wanted to be a teacher. She pursued her goal by graduating from Kokomo High School and attending Indiana University earning her BS in Education and an MA at Ball State. Joan’s first teaching job was at Von Erick Elementary School. She loved it so much that this is were she remained teaching for the next 23 years. Joan taught several grades including First, Second and Third. She says that the most rewarding aspect of the job was being able to teach the children and the children themselves and that the most challenging were the ornery ones!

Joan stated that she never faced any large world events like we are facing now but she says that the difference between the younger generation of today and her generation is that parents and teachers were definetly more strict and that they did not have cell phones or computers to distract them.

I asked Joan if she could write a message to todays younger generation to put in a time capsule to be opened in 20 years, what advice would she have for them:

To be a good citizen and be helpful to others.

It is time to come and see us! Guidelines for Outdoor Visitation
Next Post: Resident Spotlight: Rosemary Byrd »
Get Hired